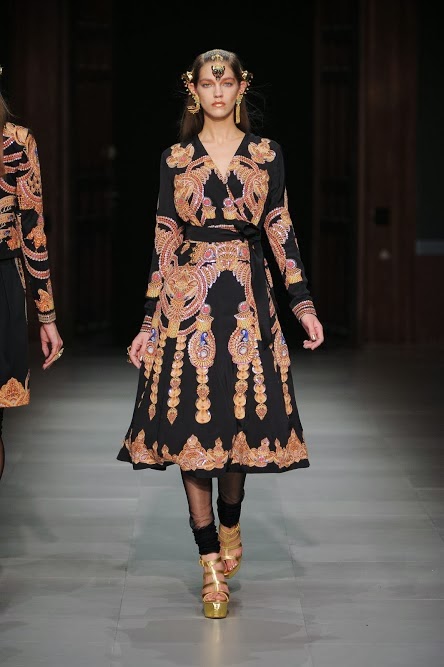 For Spring/Summer 2013, Manish Arora went back to his roots to pay a tribute to India. The country's rich artistic legacy of ornamentation continues to inspire the world, with its vibrant colours, decorative arts, intricate architecture and unique handicrafts. Indian jewelry remains the most prominent in the subcontinent's vast constellation of artisan traditions. Manish has exhibited the legacy of ornamentation in India through this collection that take on both modern and traditional forms.

The collection is an impeccable blend of India's true essence and Manish's vision of experiments in contemporary art and fashion. He takes inspiration from the myriad aesthetic layers of India - from its opulent embroideries to its intricate craftsmanship in architecture and ornamentation. He incorporates homage to nature often found in Indian jewelry.
Breaking new ground in the fashion world, Manish has reinterpreted traditional Indian silhouettes through a modern lens. The collection has a series of prints - a combination of Indian jewelry and ornate panthers, tigers and gazelles. The animal prints have geometric shapes and the jewelry prints have floral falls - another cutting edge design concept from Manish Arora. 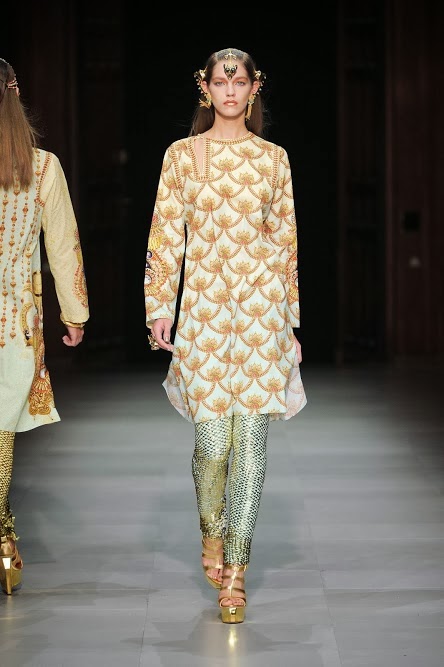 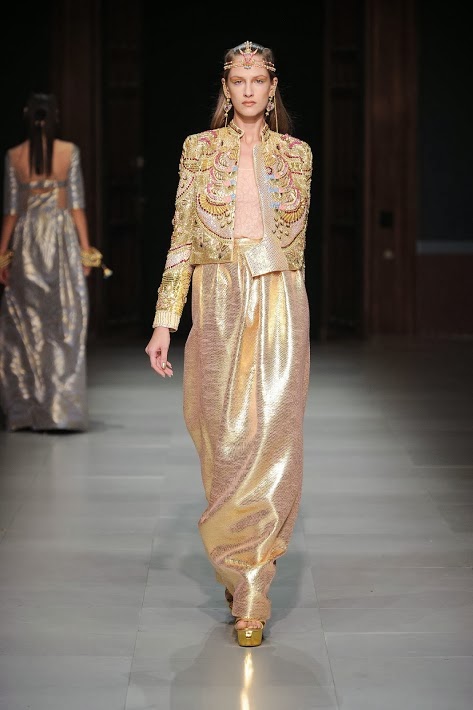 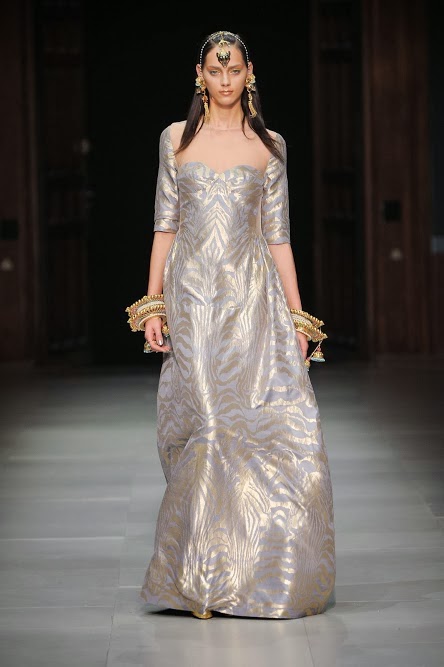 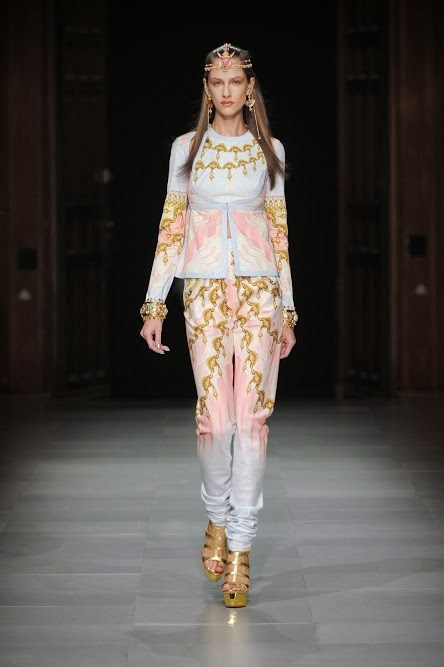 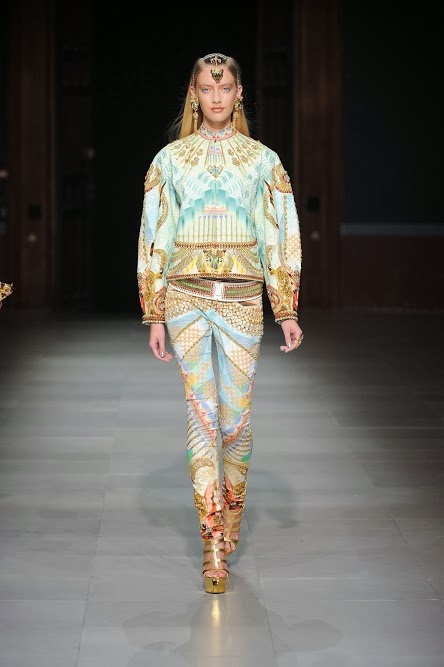 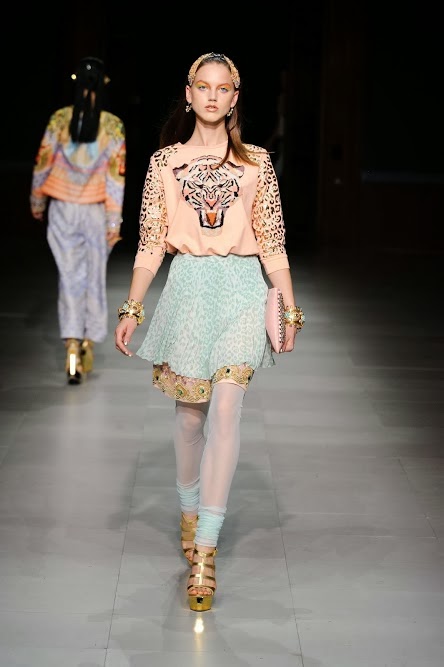 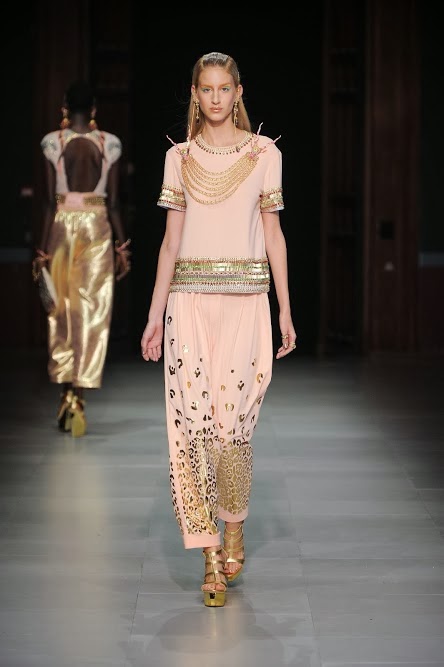 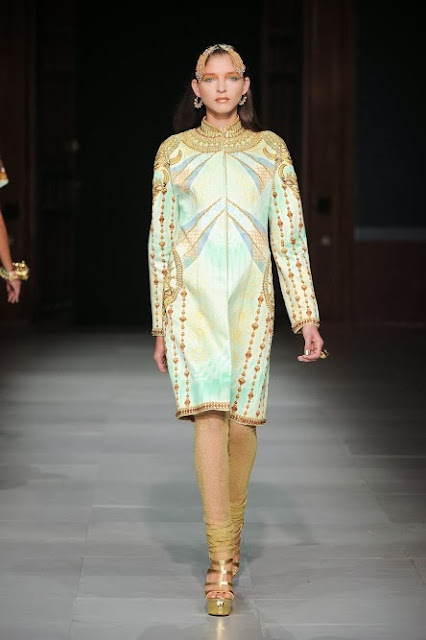 Manish Arora is one of the most celebrated and inspiring contemporary designers in the fashion world today. He is known for his astute craftsmanship and unique play on colors, such as his trademark palette of PINK and GOLD. His designs are inspired by Indian heritage, but with a contemporary vibe.

It was in 1997, that the world first viewed Manish's design aesthetic with the launch of his label 'Manish Arora'. With this he grew from strength to strength gaining a devoted following in the fashion world, which finally led to Manish exhibiting at the London Fashion Week in 2005. In 2007, Manish showcased for the first time in Paris Fashion Week. He became a member of the distinguished French Federation of Pret-a-Porter the same year. Today, Manish sells his creations worldwide across prestigious stores such as Galleries Lafayette, Joyce and Beams. In 2011, Manish was appointed the Creative Director for Iconic French Fashion House 'Paco Robanne' where he designed two successful collections for them.Manish Arora has been toasted across the Fashion world with Fashion spreads in International magazines such as V Magazine, Interview, Vogue, Elle, Harpers, L'officiel & others. He has also collaborated with eminent brands such as Walt Disney, Swarvoski, Swatch, Reebok, Barbie, Mono Prix, Nespresso, Nivea, MAC Cosmetics, Pommery, Amrapali amongst others. Manish Arora also holds a Licensing agreement with Inspecs Eyewear UK.His rich and colorful designs have been worn by bevy of international stars from Rihanna and Lady Gaga to M.I.A and Katy Perry. In 2012, Manish Arora joined hands with India's biggest Women's Ethic Wear Retail brand BIBA, to create a joint venture label "Indian by Manish Arora". To bring his sense of design and craftsmanship to Indian wear.