I admire the spontaneous abstract work by Dutch artist Karel Appel. Below you will find a painting from him, some additional information about him as a painter and several links, which I found after my research on internet. Last year I bought several blank paintings, paint as well as some knifes to start painting myself. Would love to paint in a spontaneous way like he did do. Will start soon. :-) 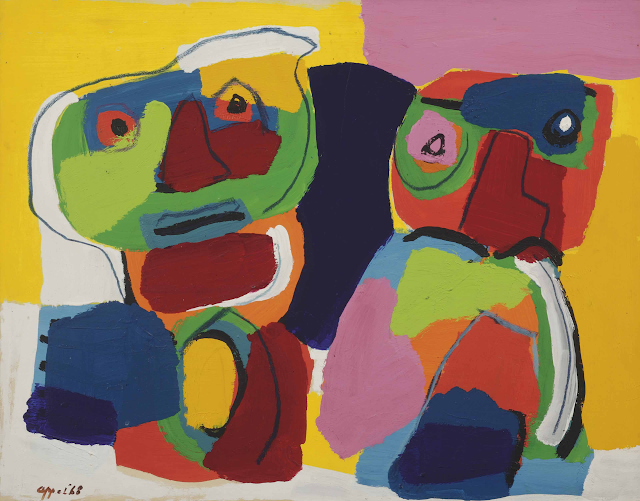 Christiaan Karel Appel was a Dutch painter, sculptor, poet and one of the founders of the avant-garde movement CoBrA. Karel Appel was born on 25 April 1921 at Dapperstraat 7 in Amsterdam, Netherlands. At fourteen, he produced his first real painting on canvas, a still life of a fruit basket. For his fifteenth birthday, his uncle gave him a paint set and an easel, and also taught him painting briefly. Appel studied at the Rijksakademie van Beeldende Kunsten in Amsterdam, where he meet the dutch painter Corneille and some years later, Constant; they became close friends for years.
In 1948 Appel joined CoBrA (from:Copenhagen, Bruxelles, Amsterdam) with Corneille, Constant and Jan Nieuwenhuys and the Belgian poet Christian Dotremont. This artistic movement was formed with a unifying doctrine of complete freedom of colour and form, as well as antipathy towards Surrealism.Their working method was based on spontaneity and experiment, and they drew their inspiration in particular from children’s drawings, from primitive art forms and from the work of Paul Klee and Joan Miró. The new art of the CoBrA-group was not popular in the Netherlands, but it found a warm and broad welcome in Denmark.
As a result of this controversy and other negative Dutch reactions to CoBrA, Appel moved to Paris in 1950 and developed his international reputation by travelling to Mexico, the USA, Yugoslavia and Brazil. Appel died on 3 May 2006 in his home in Zürich, Switzerland.
Watch here the great Cobra painter in action in this video from 1962 where we can see him in real life.
1962. Karel Appel shows how a real "cobra-artist" paint!