Dovima with Elephants by Richard Avedon, 1955 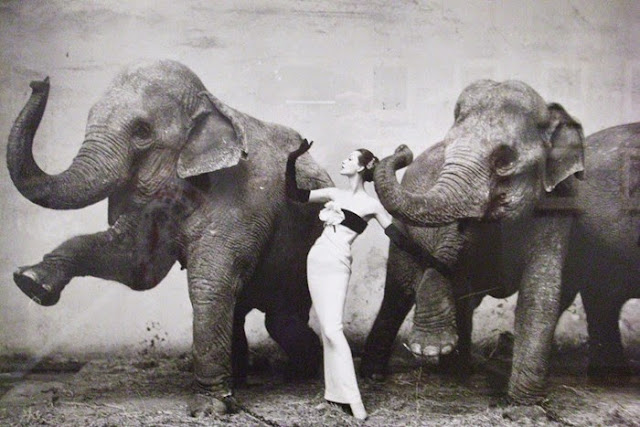 When it took place, New York-born Avedon was 32 and had been a professional  photographer for ten years. He had been recruited to work as a staff photographer for Harper’s Bazaar in 1945 soon after completing his military service, by the influential art director Alexey Brodovitch. Avedon, with his enthusiasm, inventiveness and instinctive visual flair, soon established himself  as a significant new voice in fashion photography.

The model chosen for the Cirque d’Hiver shoot was known as Dovima. Her real name was Dorothy Virginia Margaret Juba, but she created her professional name from the first two letters in her three given names. Tall and slender, Dovima epitomised 1950s style and was said to be one of  the highest-paid models of the period. She and Avedon often worked  together and Dovima later commented that the two of them ‘became like mental Siamese twins, with me knowing what he wanted before he explained it. He asked me to do extraordinary things, but I always knew I was going to be part of a  great picture.’ For this particular Harper’s Bazaar shoot, Dovima was asked to pose close to four circus elephants. The shoot took place on a hot summer’s day. Avedon later recalled that when he entered the area where the elephants were kept, he saw that the animals were beautifully lit by natural light. ‘I saw the elephants  under an enormous skylight and in a second I knew … there was the potential here  for a kind of dream image.’
Avedon went on to become one of America’s most celebrated and influential photographers, particularly for his fashion and portraiture and was still creating new work up to his death at the age of 81 in 2004. About Dovima: ‘She was  the last of the great elegant, aristocratic beauties,’ said Avedon, ‘the most remarkable and unconventional beauty of her time.